Hello, and welcome to my website! I currently do research to make GPUs fast and predictable in autonomous systems, like self-driving cars. See my below publications for the latest of my academic work, and my CV for details on my industry contributions at Waymo, GM Research, Microsoft, and others.


See the course website. It should be a lot of fun! I work in C every day with my research, and look forward to teaching a robust coverage of the fundamentals. Want to see some examples of the code I write? Take a look at the code for my most recently published paper on GPU memory oversubscription.

Teaching Assistant of the Year

Chosen as the best teaching assistant by faculty and students in the Computer Science Department at UNC. Setting a new record, nearly 30% of my 150-person class nominated me for this award. On an anonymous feedback form, one student says "You are a wonderful person who cares about his students! Thank you so much for adding some sunlight into the spring of my senior year!" And during the awards ceremony, the instructor opened her remarks by saying that "Josh saved the course for the students." Another student comments, "He was super understanding, helpful, knowledgable, and very kind. He always went out of his way to help students and his calm and helpful responses are always reliable and good. He shows a lot of great enthusiasm for the material and is a great person."

Joshua Bakita and James H. Anderson
Proceedings of the 29th IEEE Real-Time and Embedded Technology and Applications Symposium, to appear, May 2023.


Abstract: "Embedded and autonomous systems are increasingly integrating AI/ML features, often enabled by a hardware accelerator such as a GPU. As these workloads become increasingly demanding, but size, weight, power, and cost constraints remain unyielding, ways to increase GPU capacity are an urgent need. In this work, we provide a means by which to spatially partition the computing units of NVIDIA GPUs transparently, allowing oft-idled capacity to be reclaimed via safe and efficient GPU sharing. Our approach works on any NVIDIA GPU since 2013, and can be applied via our easy-to-use, user-space library titled libsmctrl. We back the design of our system with deep investigations into the hardware scheduling pipeline of NVIDIA GPUs. We provide guidelines for the use of our system, and demonstrate it via an object detection case study using YOLOv2."

Abstract: "Safety-critical embedded systems are experiencing increasing computational and memory demands as edge-computing and autonomous systems gain adoption. Main memory (DRAM) is often scarce, and existing mechanisms to support DRAM oversubscription, such as demand paging or compile-time transformations, either imply serious CPU capacity loss, or put unacceptable constraints on program structure. This work proposes an alternative: paging GPU rather than CPU memory buffers directly to permanent storage to enable efficient and predictable memory oversubscription. Most embedded systems share a single DRAM for both CPU and GPU, so this approach does not only benefit GPU tasks. This paper focuses on why GPU paging is useful and how it can be efficiently implemented. Specifically, a GPU paging implementation is proposed as an extension to NVIDIA's embedded Linux GPU drivers. In experiments reported herein, this implementation was seen to be three times faster end-to-end than demand paging, with 80% lower overheads. It also achieved speeds above the fastest prexisting Linux userspace I/O APIs with low DRAM and bus interference to CPU tasks---at most a 17% slowdown.

Abstract: "Parallel workloads are commonly modeled as directed acyclic graphs (DAGs). While DAG scheduling is an important tool, it is plagued by capacity loss; it is not uncommon to see half of a platform go unused. Here this loss is attacked from a new direction: reducing per-DAG utilization prior to assigning computing cores to a DAG. Specifically, simultaneous multithreading (SMT) is used to schedule individual nodes of a DAG task in parallel on the same physical computing core. An optimization program is given that applies SMT to a DAG in a way that minimizes total utilization without compromising correctness. Results for both individual DAGs and systems of DAGs are evaluated using both a large-scale study of synthetic DAGs and a case study. Optimal use of the program can reduce DAG utilization and required core counts by over 40% in the best cases and by 25% in nearly half of cases. Runtime requirements for for the optimization program are considered, and a tunable parameter is provided to make tradeoffs between runtime and optimality, allowing even DAGs with 500 nodes to benefit."

Abstract: "Across a range of safety-critical domains, an evolution is underway to endow embedded systems with "thinking" capabilities by using artificial-intelligence (AI) techniques. This evolution is being fueled by the availability of high-performance embedded hardware, typically multicore machines augmented with accelerators. Unfortunately, existing software certification processes rely on time partitioning to isolate system components, and this sense of isolation can be broken by accelerator usage. To address this issue, this paper presents CONCE^RT, a time-partitioning framework for multicore+accelerator platforms. When applied alongside existing methods for alleviating spatial interference, CONCE^RT can help enable component-wise certification on multicore+accelerator platforms. The challenges in realizing a CONCE^RT implementation are discussed in detail in this paper. Additionally, the temporal isolation CONCE^RT affords is examined experimentally, including via a case study of a computer-vision perception application, on a real platform."

Abstract: "Simultaneous multithreading (SMT) enables enhanced computing capacity by allowing multiple tasks to execute concurrently on the same computing core. Despite its benefits, its use has been largely eschewed in work on real-time systems due to concerns that tasks running on the same core may adversely interfere with each other. In this paper, the safety of using SMT in a mixed-criticality multicore context is considered in detail. To this end, a prior open-source framework called MC² (mixed criticality on multicore), which provides features for mitigating cache and memory interference, was re-implemented to support SMT on an SMT-capable multicore platform. The creation of this new, configurable MC² variant entailed producing the first operating-system implementations of several recently proposed real-time SMT schedulers and tying them together within a mixed-criticality context. These schedulers introduce new spatialisolation challenges, which required introducing isolation at both the L2 and L3 cache levels. The efficacy of the resulting MC² variant is demonstrated via three experimental efforts. The first involved obtaining execution data using a wide range of benchmark suites, including TACLeBench, DIS, SD-VBS, and synthetic microbenchmarks. The second involved conducting a large-scale overhead-aware schedulability study, parameterized by the collected benchmark data, to elucidate schedulability tradeoffs. The third involved experiments involving case-study task systems. In the schedulability study, the use of SMT proved capable of increasing platform capacity by an average factor of 1.32. In the case-study experiments, deadline misses of highly critical tasks were never observed."

Abstract: "Existing models used in real-time scheduling are inadequate to take advantage of simultaneous multithreading(SMT), which has been shown to improve performance in many areas of computing, but has seen little applicationto real-time systems. The SMART task model, which allows for combining SMT and real time by accounting forthe variable task execution costs caused by SMT, is introduced, along with methods and conditions for scheduling SMT tasks under global earliest-deadline-first scheduling. The benefits of using SMT are demonstrated througha large-scale schedulability study in which we show that task systems with utilizations up to 30% larger thanwhat would be schedulable without SMT can be correctly scheduled."

Abstract: "Vision-based perception systems are crucial for profitable autonomous-driving vehicle products. High accuracy in such perception systems is being enabled by rapidly evolving convolution neural networks (CNNs). To achieve a better understanding of its surrounding environment, a vehicle must be provided with full coverage via multiple cameras. However, when processing multiple video streams, existing CNN frameworks often fail to provide enough inference performance, particularly on embedded hardware constrained by size, weight, and power limits. This paper presents the results of an industrial case study that was conducted to re-think the design of CNN software to better utilize available hardware resources. In this study, techniques such as parallelism, pipelining, and the merging of per-camera images into a single composite image were considered in the context of a Drive PX2 embedded hardware platform. The study identifies a combination of techniques that can be applied to increase throughput (number of simultaneous camera streams) without significantly increasing per-frame latency (camera to CNN output) or reducing per-stream accuracy."

Abstract: "NVIDIA's CUDA API has enabled GPUs to be used as computing accelerators across a wide range of applications. This has resulted in performance gains in many application domains, but the underlying GPU hardware and software are subject to many non-obvious pitfalls. This is particularly problematic for safety-critical systems, where worst-case behaviors must be taken into account. While such behaviors were not a key concern for earlier CUDA users, the usage of GPUs in autonomous vehicles has taken CUDA programs out of the sole domain of computer-vision and machine- learning experts and into safety-critical processing pipelines. Certification is necessary in this new domain, which is problematic because GPU software may have been developed without any regard for worst-case behaviors. Pitfalls when using CUDA in real-time autonomous systems can result from the lack of specifics in official documentation, and developers of GPU software not being aware of the implications of their design choices with regards to real-time requirements. This paper focuses on the particular challenges facing the real-time community when utilizing CUDA-enabled GPUs for autonomous applications, and best practices for applying real-time safety-critical principles."

Scaling Up: The Validation of Empirically Derived Scheduling Rules on NVIDIA GPUs

Abstract: "Embedded systems augmented with graphics pro- cessing units (GPUs) are seeing increased use in safety-critical real-time systems such as autonomous vehicles. The current black-box and proprietary nature of these GPUs has made it difficult to determine their behavior in worst-case scenarios, threatening the safety of autonomous systems. In this work, we introduce a new automated validation framework to analyze GPU execution traces and determine if behavioral assumptions inferred from black-box experiments consistently match behav- ior of real-world devices. We find that the behaviors observed in prior work are consistent on a small scale, but the rules do not stretch to significantly older GPUs and struggle with complex GPU workloads."

Built a platform to share vehicles using the security of the Ethereum blockchain as the trust basis instead of a physical entity. Also uses the APIs from Smartcar to allow unattended unlocking and ignition for shared vehicles to eliminate most overhead. Prototype implementation won awards from Coinbase, Smartcar, Contrary Capital, and HackDuke at HackDuke 2017. 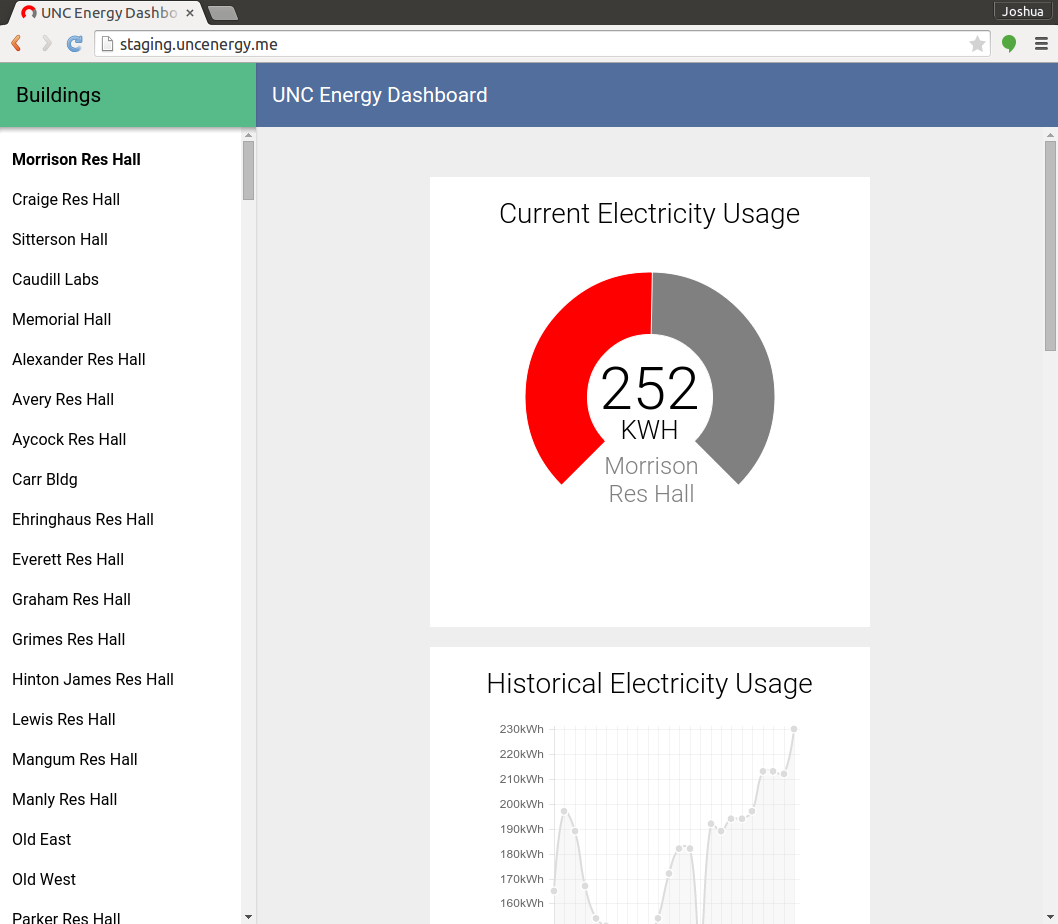 Built a website to display energy usage data for every building at the University of North Carolina at Chapel Hill. Features include:

Prototype implementation won an award from Microsoft at HackNC 2014 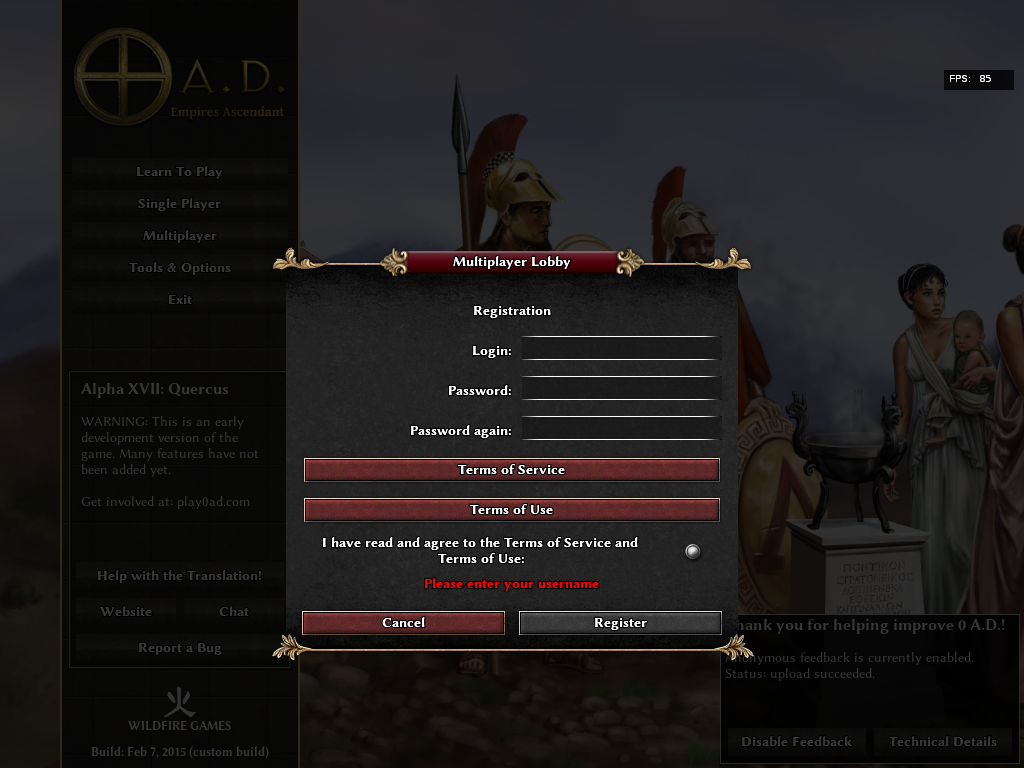 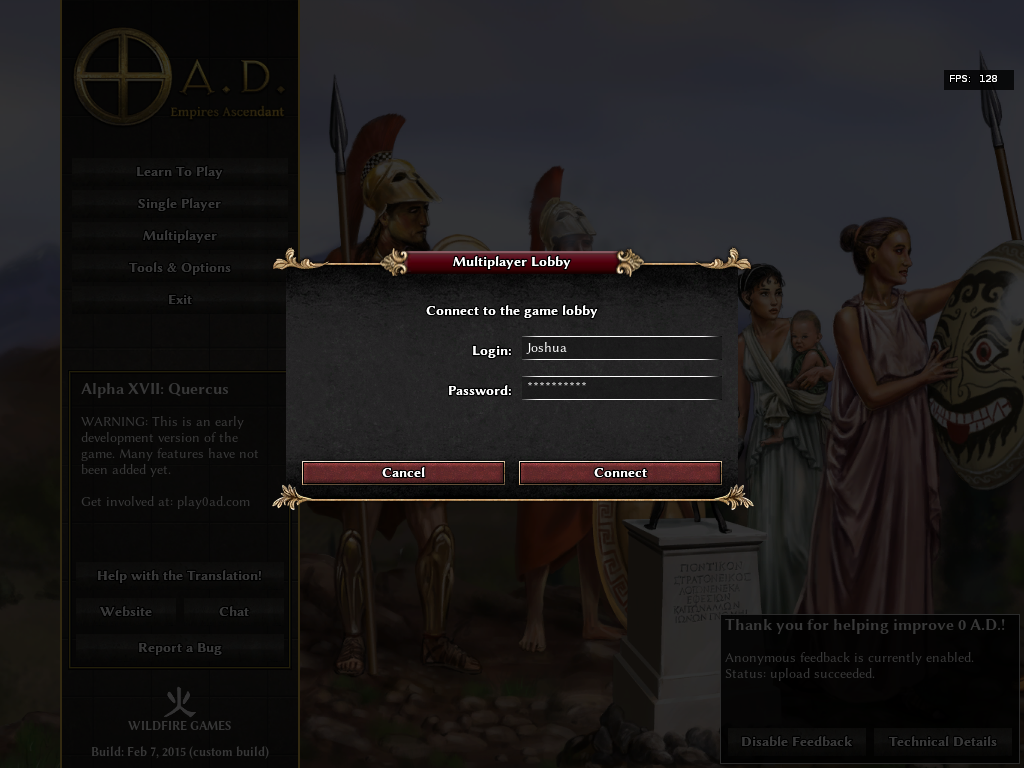 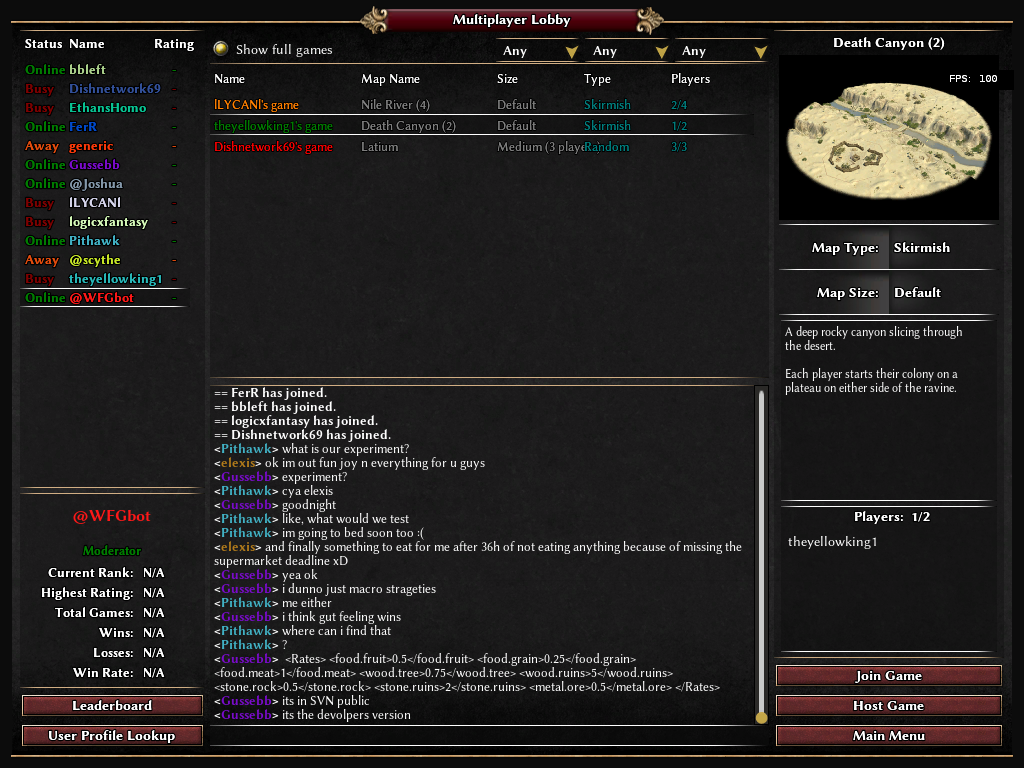